2nd - 4th December, 1947 - Arab protests at the Partition continue and the loyalties of the Arab police officers are tested...

There were even more vehicles of all types loaded above capacity with Arabs singing and shouting patriotic slogans.  Here where there are no Jews no damage has been done but in other areas many Jews were killed when Jewish buses were mobbed by the Mobs.  Bombs were thrown at some of these buses.  Many buildings were also set on fire and also Arab buildings. 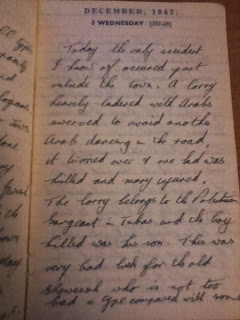 Today the only accident I know of occurred just outside the town.  A lorry heavily ladened (sic) with Arabs swerved to avoid another Arab dancing in the road, it turned over & one lad was killed and many injured.  The lorry belongs to the Palestinian Sergeant in Tubas and the boy killed was his son.  This was very bad luck for the old Showeesh who is not too bad a type compared with some.

Boundaries defined in the UN partition plan of 1947:


Trucks still arriving in full of singing people and flags flapping.  I counted ten rifles sticking up above the heads of the men in one truck.
Two T.A.C.s this morning were relieved at the end of their guard duties and walked down from the D.C.’s house to the station behind two B/Cs.  The B/Cs found that when they reached the station the T.A.C.s were not behind them.  They had absconded with a rifle & 50 rounds each.
Posted by Chris Baldwin at 20:12